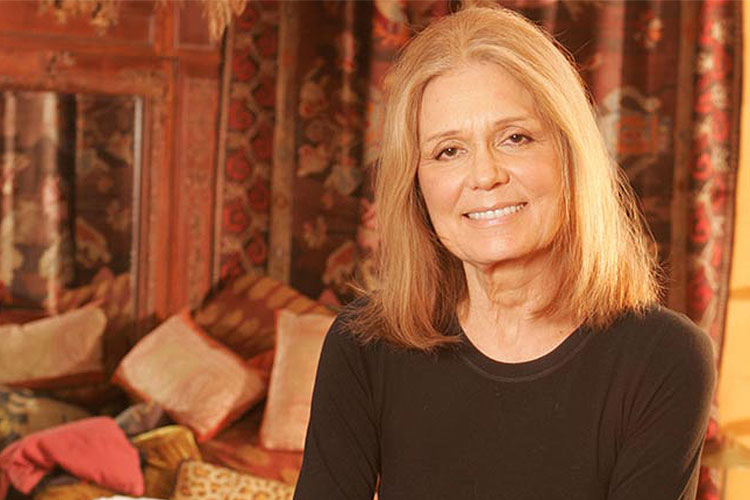 However you may feel about her, the fact that Gloria Steinem turned 82 years old this year is astounding.  Even more remarkable is that she’s been a social and political activist – recognized as a leader and spokeswoman for the feminist movement – for over 46 years.

Her roots in women’s rights were deep; her grandmother was a committee chairwoman in the National Woman Suffrage Association, delegate to the 1908 International Council of Women, and the first woman to be elected to the Toledo, Ohio Board of Education.

Steinem graduated Phi Beta Kappa from Smith College, she spent 2 years in India as a Bowles Asian Fellow, then as director for the Independent Research Service – an organization later learned to be funded by the CIA.

She embarked on a journalism career, writing and editing for such magazines as ESQUIRE, NEW YORK Magazine, COSMOPOLITAN, and later founding MS. MAGAZINE.  For one of her early stories, she was employed as a Playboy bunny in New York, later publishing an article (A Bunny’s Tale) exposing the exploitive working conditions and sexual demands of the women.

Steinem believes the spark that began her active feminism occurred in 1969, when she covered a controversial speak-out for NEW YORK Magazine.  She had an abortion herself at the age of 22, and although she didn’t speak at the event, she knew it was the first time I had taken responsibility for my own life – I wasn’t going to let things happen to me.  Not until age 66 did she marry – to David Bale, father of actor Christian Bale.  It was only 3 years before Bail died of brain cancer.

Gloria Steinem was a good friend to Chrysalis founder Louise Noun, visiting her several times, and  helping raise funds in the early days of the foundation.  She continues to write, speak, and campaign for the rights of girls and women worldwide.

Here is a wonderful article on the ways “Gloria Steinem Taught Us To Be Better Women.”  Just for fun, check out a few Gloria-isms (quotes from Gloria) that ELLE Magazine recently shared.

Thank you Gloria for helping us empower girls and women!