What does equal rights for women really mean? 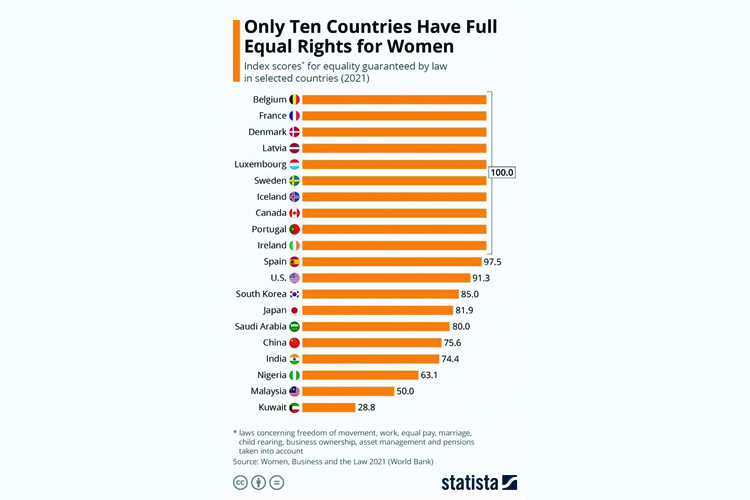 The increasingly dangerous evacuation of Americans and Afghan allies has caused our country, once again, to be deeply divided. As well, concern over the Taliban takeover and the Taliban’s history brings concern for Afghan citizens, especially girls and women.

Before the early 2000s, repression was a practice of the Taliban, particularly for females. Girls could not attend school, women could not hold jobs or leave their homes without a male relative with them. Women and girls were required to wear burqas, covering every inch of their bodies including face and eyes. Women who defied these directives were brutally punished or killed, causing Afghanistan to have the highest maternal mortality rate in the world.

Although Taliban leaders have promised to honor women’s rights within the norms of Islamic law, they warn working women to stay home until Taliban fighters have been “trained” to approach and speak with them. This step back in time jeopardizes significant progress for Afghan girls and women over the last 20 years, and unfortunately reflects the circumstances of countless women and girls across the globe.

According to the report Women, Business, and the Law 2021(recently published by the World Bank), only ten countries in the world offer full legal protections to women: Belgium, France, Denmark, Latvia, Luxembourg, Sweden, Canada, Iceland, Portugal, and Ireland. Ranked lowest is Yemen, just ahead of Kuwait. Overall, the report finds that women have just three quarters of the legal rights afforded to men.

The United States ranks at 91.3% - losing points since last year due to the lack of laws guaranteeing equal pay and equal pensions, and because of significantly “bad” laws around parental leave.

Although there has been progress over the last decades, world gender equality was not achieved by 2020, when the effects of COVID-19 began to directly and disproportionately threatened women’s futures.

In the United States, women comprise the majority of social service, health, and unpaid caregivers, and women continue to earn less than men for the same work. Women also face increased risk of job loss and violence in the home.

Gender equality is a basic human right; it can increase economic growth and improve development outcomes. When the legal environment encourages and promotes women’s work, the opportunity for women across the globe – from the most developed economies to those desperate to improve economic success.

Women with equal opportunities enter and remain in the labor force, improving the future for themselves, their families, their communities, and society at large. Laws and policies can positively or negatively affect girls and women throughout their lives, as indicated in the following graphic, and as measured in the report: Women, Business, and the Law 2021.