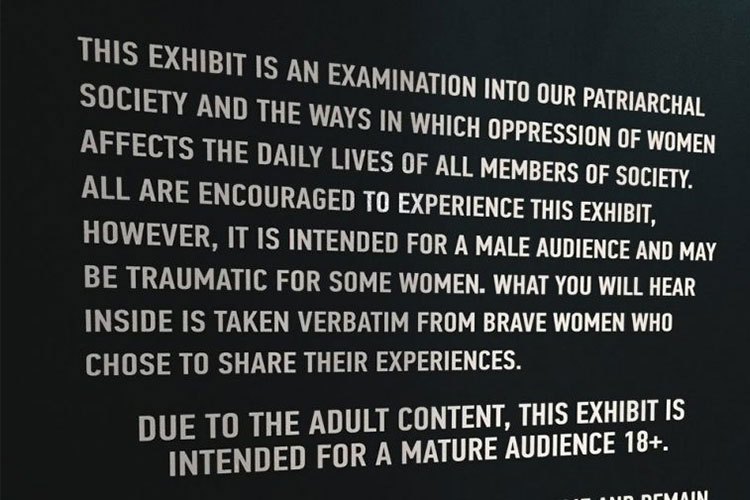 Catcalling is something girls and women have long endured.

But in a new art exhibit, “This Is What It Feels Like” (its opening panel appears to the left) has received a powerful response from men who left the exhibit in tears – and with new empathy for what women and girls are subjected to on a daily basis.  Recently opened in Sacramento, California, the audio art exhibit takes viewers through a darkened hallway as they hear the sounds of men catcalling – with a range of harassing, insulting, sometimes threatening cries.

Artist Terra Lopez based the project on  her experiences as an adolescent, when seemingly innocent flirters became stalkers who followed her home from school.  Most disturbing about the project is that the recorded catcalls are words and comments that women report actually hearing, based on input from over 100 women interviewed by the artist.  After less than a week, over 4,000 have walked through the exhibit, including Sacramento Mayor Darrell Steinberg, who called the experience “jarring” and “incredibly important.”

Many of us remember the viral video from a few years ago involving a woman walking in New York City.  Actress Shoshana Roberts strolled the streets of the city for 10 hours, all the while being taped by a hidden video camera.   She experienced over 100 incidents of catcalls or harassment, demonstrating instances of teasing to threats.  “Not a day goes by when I don’t experience this,” Roberts noted.  See the 2-minute video here:  https://youtu.be/b1XGPvbWn0A

According to psychologist Dr. Yvonne Fulbright, “…men who do this without thinking twice are those who have learned that it’s okay to objectify women, and disrespect women in the guise of a compliment.  These lines of thinking are bolstered when important other men in their lives hold the same beliefs.”

Unfortunately, many of our grantees tell us that the women and girls they work with have reported experiencing more frequent and crude comments, touches, and harassment from boys and men in schools, on streets, and in the workplace.  This “locker room” behavior, now displayed at the highest levels in our culture, is felt to be a right of many boys and men.

Our work helping girls gain strength and self-assurance helps them combat the experiences of harassment by building self-advocacy.  The ability for girls and women to take responsibility for their own well-being and speaking up when being mistreated are the powerful skills of resilience, confidence, and courage are the results we see in the hundreds of girls in Chrysalis After-School programs each year.

You and I can play our part by being positive role models and by speaking up when others can’t.