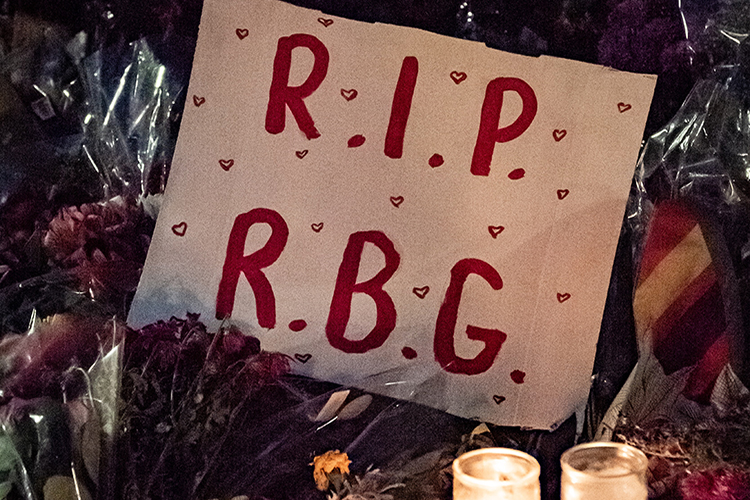 This weekend, the death of Supreme Court Justice Ruth Bader Ginsburg marked a watershed moment in the history of the Court. Established by the U.S. Constitution, the court of six members (all men) first convened in February of 1790.

Dubbed “the notorious RBG” for her pointed and powerful opinions, Ginsburg became an internet sensation when a law student started a Tumblr blog as a play on the name of rapper Notorious B.I.G. This began the surge of interest in her life, as noted in the blog: “In her oral dissent to the Supreme Court’s majority opinion invalidating a key provision of the Voting Rights Act, RBG quoted a familiar MLK Jr. line but added her own coda…’The arc of the universe is long, but it bends toward justice,’ but only ‘if there is a steadfast commitment to see the task through to completion.’”

A biography, “Notorious RBG: The Life and Times of Ruth Bader Ginsburg,” was published in 2015, co-authored by Shana Kniznik, the law student who started the blog. Only three years later, the documentary “RBG” became popular and earned an Oscar nomination, and a biopic, “On the Basis of Sex,” written by her nephew was released.

Even for a woman to be considered for the Supreme Court took decades – only when women were granted the right to vote was Florence Allen considered in 1930. Allen was elected to the Ohio (state) supreme court, and later appointed to a federal appeals court in 1934 by President Franklin D. Roosevelt.

In their book Shortlisted: Women in the Shadows of the Supreme Court, authors Renee Jefferson and Hannah Johnson tell the important stories of only nine women who have ever appeared on presidential lists for potential positions on the Court. Following Allen, Amalya Kearse (a federal appellate judge) was the first African American woman and Cornelia Kennedy (the first woman to serve as chief judge of a U.S. district court) were among the short list.

Not only does the book recap the historical oversight, but it shares the harm of the process of adding qualified female candidates to potential leadership lists, creating the appearance of diversity, then passing them over for the status quo. Listing and bypassing qualified female candidates is a fate for many women – especially minorities – continuing the legacy of bias and discrimination.

For the first time in 102 years, the Supreme Court announced in March that it would postpone oral arguments in response to the COVID-19 pandemic. Following the death of Ginsburg, President Trump notes he will nominate a female to fill her position, although it is unknown whether Congress will take up the nomination prior to the 2020 election, just over 40 days away.

Justice Ruth Bader Ginsburg was a woman who never stopped fighting for what is right. She demonstrated remarkable tenacity and grit. Similar to Chrysalis founder Louise Noun, Justice Ginsburg was a feminist icon and champion for justice. We can be grateful for her resolve and thankful to have lived during her tenure.